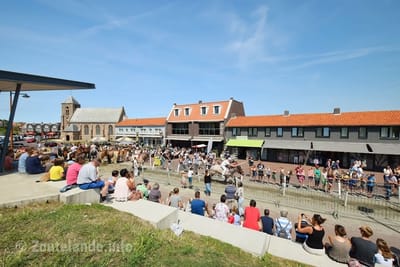 An exciting game for young and old. At Walcheren ring riding games are held every Summer. For this competition one uses excellent maintained horses, usually ‘true Belgian’. The manes are at this occasion entwined together and the small docked tail decorated with colourful snares and a green branch. Many villagers, completed with tourists, are penetrating thorugh the gates to see the play as close as possible.

An age-old sport at Walcheren 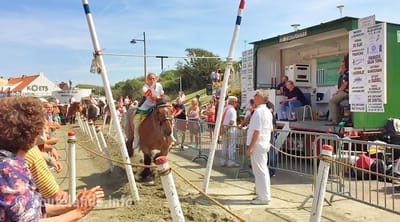 Ring riding, as still excercised at Walcheren, is a lively piece of folklore, a play originated from the distant past. The nobility disputed each other while the enslaved people watched. The play could be considered as a sequel to the tournaments. 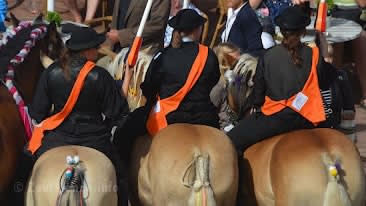 The aim was when a man sitting at the back of a horse, was ensconced behind a shield and an armour. The winner was the one who knew how to sting his opponent from his horse.

The game was because of this rough treatment forbidden for married people; later on was ring riding only allowed for unmarried people. Nowadays the game is mainly operated by the peasantry. Although farm work is done by tractors they still love to use their fat Belgian horses. 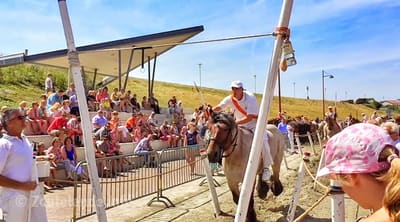 According to the game rules the track should be 36 m long. It is trimmed with poles which are at the bottom 1 m apart from each other and at the top 1,65 m. In length they are at both sides connected with ropes, while in the middle under a gate a line at about 2,20 m height stretched across is, at what a holder for the ring attached is and this holder could be pushed back and forth. The participant could determine the place of the holder itself, depending he is left- or right-handed. The ring of 38 mm average could be inserted into the holder with a feather. It is the intention to sting the ring of the holder with a spear, comparable with a wooden spear, anticipated at an iron tip. If the ring is stung at the spear but it is lost before the end of the track, it is counted as a miss. During this action the horse should be in gallop.

If the horse is trotting, the participant should run over provided that he before overtaking the ring the spear has been held back. If the horse doesn’t gallop anymore, he should try it once again. If it don’t work again, the next participant is at turn.

The winner of the tournament is the one who has stung the most rings during the whole day long.

For dates of competitions, please look at our events page.