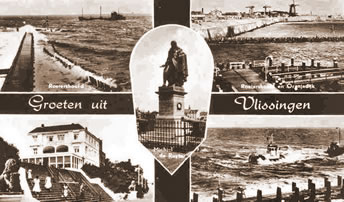 The first mention of Flushing (Vlissingen) dates back in 620. Flushing was not more than a small hamlet to west of the old town in those days. The name ‘Vlissingen’ is probably derived from a bottle, that plays an important role in all kinds of theories and still can be seen in the city's coat of arms. The city obtained city rights in 1315. 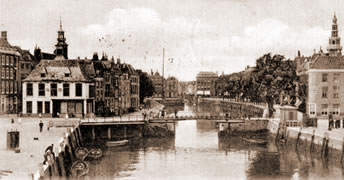 Shipbuilding has determined the town scape of Flushing for centuries. One of the yards of the Admiralty of Zeeland was located in Flushing. In 1814, the Royal Navy established here the Marine Establishment Flushing, a shipyard for constructing, repairing and equipping naval vessels, which was closed in 1868. In 1875 the shipyard site was used by the ‘Koninklijke Maatschappij De Schelde’ (Royal Company ‘De Schelde’). 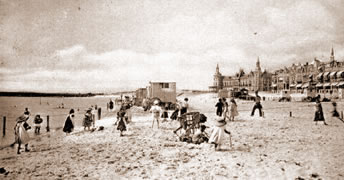 The first serious plans to make Flushing a seaside resort dates from around 1880. A modest bathing pavilion was set up in 1872. At the bottom of the dunes, where later the Lion Staircase would be, ‘Bathhouse Flushing’ was opened. Then the entrepreneurs and managers of Flushing worked hard to make the city suitable for the rising tourism industry. They were aided with the start of the steam boat service to England, the construction of a tram connection to Middelburg and the arrival of the railroad tracks. With the newly constructed railroad from West Brabant the first visitors arrived in Flushing. The ‘Zeeland Steamboat Company’ ensured some English tourists, but tourism didn't really get off the ground.

With the appointment of Mr. Smit in 1878, who was also founder of ‘De Schelde’ company, as mayor the developments of Seaside resort Flushing gained momentum. Flushing made a development plan under the leadership of this new mayor that would open up the old town center. A wide road, the Badhuisstraat, became the connection between the old town center and the beach. ‘Flushing city’ and ‘Flushing bath’ are still two separate areas. Despite construction of the Badhuisstraat it took a long time before the separation was lifted. Beach visits and pools were only something for the wealthy in those days.

Tourism really starts to get going when in 1886 Grand Hotel des Bains, later Britannia is built on top of the dunes. Soon, in the halls of this hotel, concerts and other activities took place. However, in the early days the hotel was closed during winter and therefore operating it was eventually impossible. That changed in 1923 when the hotel came in the hands of the ‘Zeeland Steamboat Company’ at a public auction. After a thorough renovation, the name was changed to Grand Hotel Britannia.

In 1892, the organization to promote foreign visitors was established in Vlissingen. This organization made and distributed flyers and placed advertisements in national newspapers and magazines. The organization also advised the municipality about the arrangements on the beach and boulevard. The development of the resort also got plenty of attention from the municipal council after 1900.

From 1906 there was a bandstand and in 1907 the Lion Staircase was constructed to make access to the beach even easier. Kiosks came, and so did footpaths and benches. At night electrical arc lamps ensured that walking was safe. The city wall was extended as a boulevard past the hotel making this nearly two kilometers long promenade the showpiece of Flushing. From that time tourism was really going.

On the beach at Boulevard Evertsen, people were able to rent beach coaches who were drawn by horses to the seaside. At the site of the later Beach Hotel came the so called ‘Badkaartenbuffet’ (Beach Ticket Buffet). Large numbers of high thatched beach chairs on the beach had to make the seaside visitor as comfortable as possible. The bandstand made sure that it would provide the necessary entertainment on set times, and in a bathing pavilion people were able to provide their thirsty throats with a refreshing drink. The ‘Zeeland Steamship Company’ ensured that English tourists would visit regularly, who would enjoy a calm and relaxing vacation in ‘Britannia’.

The number of hotels and guest houses grew and more wealthy private individuals wanted to live near the beach. The boulevard got its first buildings and below the new staircase erected a large villa park. Flushing had in 1919 a mature seaside resort with all the necessary amenities, a good infrastructure and belonged to the top five in the Netherlands in that time.

In the 30s, mayor van Woelderen wanted to enlarge the economy of the city based on three aspects: tourism, harbor and industry. The harbors of the city were expanded and Flushing was promoted as a seaside resort. A bathing beach and the promenade pier was constructed for this purpose. A pavilion was built at the head of the pier that, aside from a dance floor, also had a theater. The pier was a great success and was a real crowd pleaser in the years before the war.

The people from Flushing and the tourists weren't able to enjoy the pier for very long. With the arrival of the German occupation in World War II, the pier was demolished to prevent a landing from the allied forces. A similar fate befell the once magnificent Grand Hotel Britannia. The German occupiers transformed it to their headquarters with heavy bunkers on both sides. That's the reason why after the liberation of Flushing the building was destroyed by allied troops.

A reconstruction followed after the war that formed the basis for the resort of today. Tourism rose sharply in the following years. In the 90's, the center and the boulevards of Flushing were completely renewed. Tourist attractions came, as well as many new homes, an indoor shopping mall and covered shopping streets. Since then Flushing has become a modern city where it's good to live, work and relax.